Perhaps we’ll make up our minds one day. Our government intervenes militarily where the UN fears to tread/UN fails to carry out its obligations/UN fails to function due to the OIC voting block countries and their anti-western allies (delete as applicable) and the supposed righteous get out on the streets with the Stop The War mob, demanding that we mind our own business.

We mind our own business and ordinary people are forced to flee their country in desperation while a movement of fanatical murdering religious ideologues grows in military power, confidence, and is able to slaughter and enslave thousands of innocents (including children) and destroy priceless antiquities with impunity – none of it bothering our consciences at all until a poor, drowned child is washed up on the shores of Turkey.So, now we’ve seen the consequences of failure to tackle force with greater force, and the results of parliament’s insistence on non-intervention, thanks to public pressure of an angry, vocal minority, which will it be, humanity?

Turn a blind eye, protest western military intervention, and let the unspeakable happen so long as it isn’t ‘in our face’?

Or perhaps we should stop validating the anti-western “it’s all about oil and money” bullshit narratives which serve merely as a recruitment sergeant to ever more easily-led and uneducated minds, eager to demonstrate their supposed canny, perceptive intelligence through propagating conspiracy theories, falsehoods and victimhood narratives.

I saw the following image shared by a grievance-monger on a social media post. Herein lies the problem with the Internet. This image will be shared and accepted without question or evidence as fact by thousands of people. Many of these will be fed a diet of this stuff and accept it as the truth. In the process, they are building up a false narrative. For some, it will be one of these pieces of propaganda which finally drives the easily-led young mind to abandon their priviliged life in the West and head off to fight alongside the Islamists. 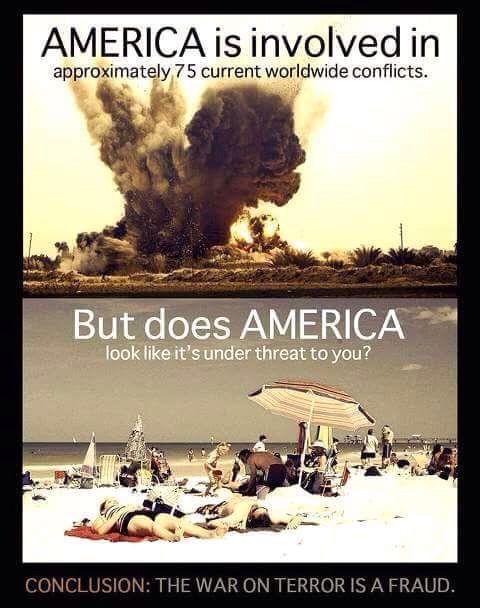 This image says it, so it must be true.

And it’s not just these kind of dangerous, opinion-shaping propaganda pieces which are shared. Whether it’s the ‘five of the same weekdays occurring in a single month and making a Money Bags’ month, the date Marty McFly went back to the future, NASA spending millions developing a pen to work in space (whilst the Soviets used a pencil), or an argument between a US warship and a Spanish lighthouse, people are all too keen to propogate myths without the most basic fact-checking. Snopes is always a good start for the standard urban myths. More political myths require some more personal investigation and checking of primary sources, away from the opinion pieces of the Guardian or the Mail.

Put baseless narratives both into the hands of disaffected youths, struggling with their ‘identity’ and into the hands of those in poorly educated societies, and you have a gunpowder keg of ‘grievance’. In turn, certain people see this anger and accept is as justified. “They’re angry, so we must be being beastly to them.” is a far easier path to go down than “Hang on… From where exactly are they getting their information? Do they have a free press or does the regime in charge or those in influence such as religious leaders promote falsehoods?” or thinking things through for yourself from first principles.

The flip-side to the Internet of course is that it is relatively easy to check claims. For the record, the USA is not currently engaged in 75 current worldwide conflicts… Nothing like it. I challenged the poster to list just ten of these. He won’t manage anything like ten, and if he does, he’s making them up.

Returning to the refugee problem… The Kurds have no scruples in dealing with Islamists in the only way you can fight their ilk and they have demonstrated clearly that ISIS, like any bullies, are quick to turn tale and run when countered by forces who have something to live for – especially female soldiers*, rather than the lSIS death-culters themselves, who, in their own words “love death more than life.”

So, how do we deal with the current refugee crisis? As with many things, the ideal means would be to cut off the problem at source, rather than the sticking plaster approach of moving populations wholesale to a new continent.

I would suggest that a history book may help those who are struggling for answers to conclude what has worked and not worked in the past when dealing with similar forces of evil.

Here’s a hint though… How successful do you think negitations with the infamous moustachioed Austrian whose name I shall not mention would have gone? Here’s another hint… We know, because we tried negotiating, but it’s hard to make agreements with megalomaniacs and those who seek your destruction. If your history isn’t too hot, research the Munich Agreement and Molotov-Ribbentrop Pact and how successful they were ultimately.

If only more people were aware of history, perhaps we wouldn’t condemn ourselves to make the same mistakes time and time again.

The penny will eventually drop that the civilised world will have to defeat Islamism through military force. Alternatively, If we don’t intervene, it may just be possible that, as historian Tom Holland says, the Islamist bubble could burst by itself after a few decades of blood-soaked weariness in a similar way to the how the Thirty Years War finally ended, with populations more than decimated in the process.

The tragedy is that either way, I fear it will take a few more washed-up children and countless thousands of more innocent lives lost in even worse circumstances away from the press photographers and social media sharing images of a single child before the penny does drop.

*ISIS fighters are so faithful to their religion and utterly convinced of their faith that they are more than happy to die for it, because they believe that dying in battle for Islam assures them a place in heaven. Unless, of course, they’re killed by a woman, which means they go straight to hell – one of the many reasons they are scared shitless of fighting Kurdish and Yazidi women.